by Penny Pollack and Graham Meyer 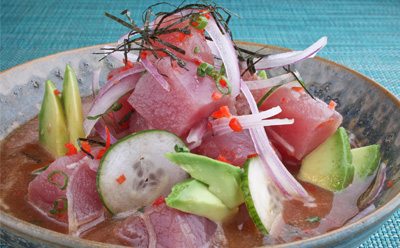 The star stallion in chef Gastón Acurio’s stable of restaurants is Astrid y Gastón, a spot in Lima, Peru, that last year placed second-highest of all South American restaurants (#35 overall) in the San Pellegrino 50 Best rankings. At about the end of June, the newest foal will be Tanta (118 W. Grand Ave., no phone yet). It’s Acurio’s first Chicago outpost for his New Peruvian cuisine and only his third in the United States, after versions of La Mar Cebichería in New York and San Francisco.

Veronica Beckman, one of Acurio’s local partners, says Peruvian food arises from both the confluence of biomes—Amazon, desert, mountains, ocean—and the eclectic immigration patterns, with Spanish, African, Arabic, Chinese, Japanese, and Italian influences. “The biodiversity and cultural heritage mash together to create what Peruvian food is,” she says.

Some spices and Acurio’s sauces will be imported from Peru, but fresh fish and even the distinctive ají pepper will be sourced from closer to Chicago. Tiraditos, cebiche (a.k.a. seviche), anticuchos, and Chinese-influenced dishes such as lomo saltado and arroz chaufa typify the menu. Naturally, the distinctively Peruvian spirit pisco features on the drink menu.

Beckman says she’s excited to introduce Chicagoans to a Peru they haven’t seen here—although that doesn’t extend so far as the famously Peruvian dish of guinea pig. “We’re not planning to have that on the menu,” she says. “Not just yet.”