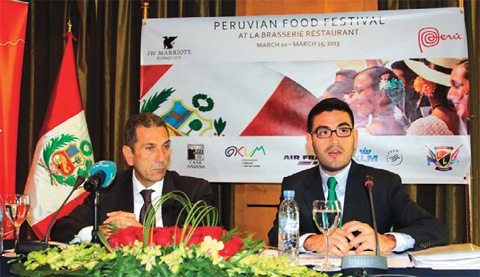 The Embassy of Peru in Kuwait hopes the Peruvian Food Festival would give the Kuwaiti public a taste of the South American country’s diverse landscape, culture, and love for food and life.
“The is the best opportunity to introduce our country to Kuwait. The embassy opened in November, 2011 and this is the biggest cultural event we have had (so far)”, Charge d’Affaires ad interim Gustavo Bravo told KUNA at the launch of the six-day event, on Sunday evening.
“The event is not only gastronomical but also cultural”, he said, referring to a group of professional dancers who were flown in specifically to perform the traditional elegant and colorful ‘Marinera’ dance. Preparing the food is renowned Peruvian chef Javier Morante, who was also flown in to Kuwait for the event.
The festival is being organized by the JW Marriot Hotel in collaboration with the Embassy of Peru and Kuwait’s National Council for Culture, Arts, and Letters.
Peru is recognized for its culinary tours, food safaris, world class cooking schools, and food fiestas – including the Mistura Food Festival. It also recently won the award for the world’s leading culinary destination at the World Travel Awards.
At the entrance, visitors to the festival were handed a glass of Chicha Morada, a dark sweet refreshing syrup-like drink consumed cold since ancient times, and which is the result of boiling purple corn with pineapple, cinnamon, clove, and sugar.
As for food, the oblong-shaped Tacu tacu – a mixture of beans and rice, fried and topped with breaded and pan-fried steak and an onion salsa – was both delicious and scrumptious.
Other popular local dishes on the buffet included Fish Ceviche, Lomo Saltado (sauteed beef), and Pulpo al Olivo (octopus in black olive sauce).
“We have coasts, highlands, and the Amazon,” said Bravo, noting the three geographic regions that support the variety of ingredients found in Peruvian cuisine.
Located in western South America, Peru borders five countries; Brazil, Chile, Colombia, Ecuador, and Bolivia. It has no doubt taken influences from each. It also benefits from having the Pacific Ocean to its west, with seafood playing a major role in its culinary dishes.
Ancient cultures that once thrived in Peru like the Norte Chico civilization, the Incas, and the Spanish Empirehave also had their imprint on its food.
By way of encouragement of Kuwaiti tourists to visit his homeland, Bravo described Peru as a “safe country” where one of the world’s wonders, the ancient 15th century Inca city of Machu Picchu, is located. “We have natural resources as well as modern cities.” The capital, Lima, is inhabited by seven million people, and though it is big, it is an organized city – and it is safe, said the diplomat.
“We receive around three million tourists every year and this number is increasing. Lately, we have been encouraging the visit of tourists from the Middle East, since hosting the last summit between Arab and South American countries in October, 2011.” “We have recently signed an agreement with Kuwait for the exemption of visas for diplomatic and special passports, which has now entered into force.
“In the case of Kuwaitis planning to travel to Peru, they need basic documents to show they are travelling for tourism reasons, like booking and hotel reservations. The Consular section at the embassy currently provides all of these facilities.” As for applying for a visa, he said arrangements are made over the phone with the required documents sent by e-mail followed by a short interview, he pointed out.