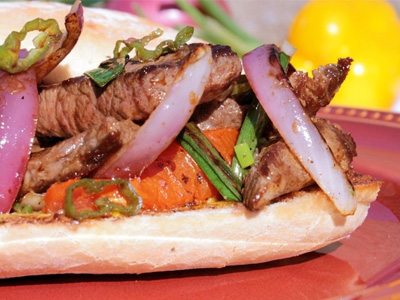 As the consummate conference of cool— SXSW—takes place in Austin this week, we continue our week-long exploration of Latin food and cooks in the Texas capital. Up today: a new food trailer hits the city’s already vibrant mobile food truck scene, proving what we’ve known all along—that Latin food in Texas is way more than tacos. Llama’s Food Trailer specializes in authentic, home-style Peruvian food with chef-y, sometimes vegetarian, sometimes gluten-free twists. Because this is Austin, after all.

The story of how Llama’s got its start is the stuff of immigrant nostalgia. A Peruvian-born, Texas-raised guy is so proud of his native food that he wants to find a way to share it with the world. Or at least with the city he lives in. “Like every Peruvian,” said 30-year-old Miguel Barrutia, “I dreamed of opening a Peruvian restaurant to teach people about our food.” But a bricks-and-mortar restaurant would have taken big money and “that wasn’t in my plan.” Instead Barrutia, who also works in local real estate, decided to start with a food truck, which would minimize overhead costs but still let him get up and running. He tapped into friends for help—a friend’s sister created the company’s logo and designed marketing materials, another friend guided him through the food truck inspection process—and into his childhood memories of home cooked meals for ideas on what to serve. He hired local cooks and taught them to make “classics like aji de gallina and arroz con pollo and lomo saltado,” he said. “And they were great.”

But with in a few months of opening, a game-changer walked in. Julio Cesar Florez was a 33-year-old chef who’d been trained at Le Cordon Blue and who’d worked in several highly respected Austin kitchens. Most important: he too was a Peruvian-born ex-pat who dreamed of sharing his country’s food with everyone around him. He approached Barrutia and just few months later joined Llama’s as its chef. 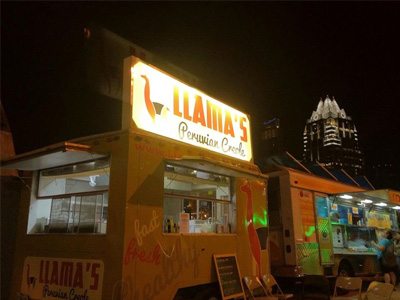 Florez quickly made adjustments to the menu, adding sandwiches like the ones he ate as a boy in Lima on the days his he’d go to work with his dad. “We’d stop into this tiny little place and we’d order a pan con chicharron, which is a classic Peruvian street food sandwich,” he said. “I wanted something similar to that so I created a pork belly sandwich for Llama’s.” Ever the chef, his is no regular sandwich of course: the pork is marinated in hoisin sauce, topped with pickled onions and an aji amarillo mayonnaise. Florez also took the ever popular lomo saltado and made it mobile by turning it into a sanguche (yes, that’s a sandwich, like abuela pronounced it.) Llama’s still serves the traditional aji de gallina, chicken stewed in a creamy aji amarillo sauce, but it’s also added some more adventurous options, like anticuchos, or grilled beef hearts. “Some people are a little uncertain about that at first,” Florez says. “But when they try it they absolutely love it.”

As out there as they can be, Florez and Barrutia still understand their Austin market. So “a lot of our dishes can be made vegetarian and even gluten-free,” Florez said. More proof that they get Austin: Tonight, for SXSW, they’re hosting a “Secret Party”—because isn’t that just what hipsters do?—where a DJ will play tunes and attendees will get to sample Peruvian treats. (You can get details here.) Llamas is located 611 Trinity. 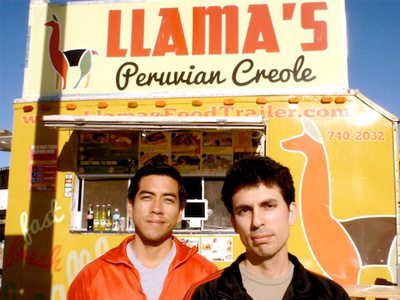